I’ve been feeling a little off since Monday – & yesterday was so bad, that when I looked at my computer screen, I got a huge sinus concentration right between my eyes…. 😦 I did not feel good!! Fortunately I got an appointment at the doctor at 09h30!! She immediately prescribed me some antibiotics and booked me off for two days…

I’m a sleeper when I’m sick… & I’m sure it makes me get better sooner!!! I’m feeling much better today, still very tired though – so after this post I’m back to bed!!!

I was so impressed by how this panorama panned out – it consists of four photos & I could not be happier with the result!!! I can’t remember who was playing against who (sports is not my ‘thing’ 😉 ) but there were a lot of people!!!

The next photo is nothing special – I just played with the perspective crop!! I’m going to post the result & my original photo (for comparison…) Although it is obvious that something is not right with the result – I love how it turned out!!

Which do you prefer??

The next shot is my first attempt at creating an HDR from one single shot!! I still have a long way to go… but I thought I’ll share my result with you!!! 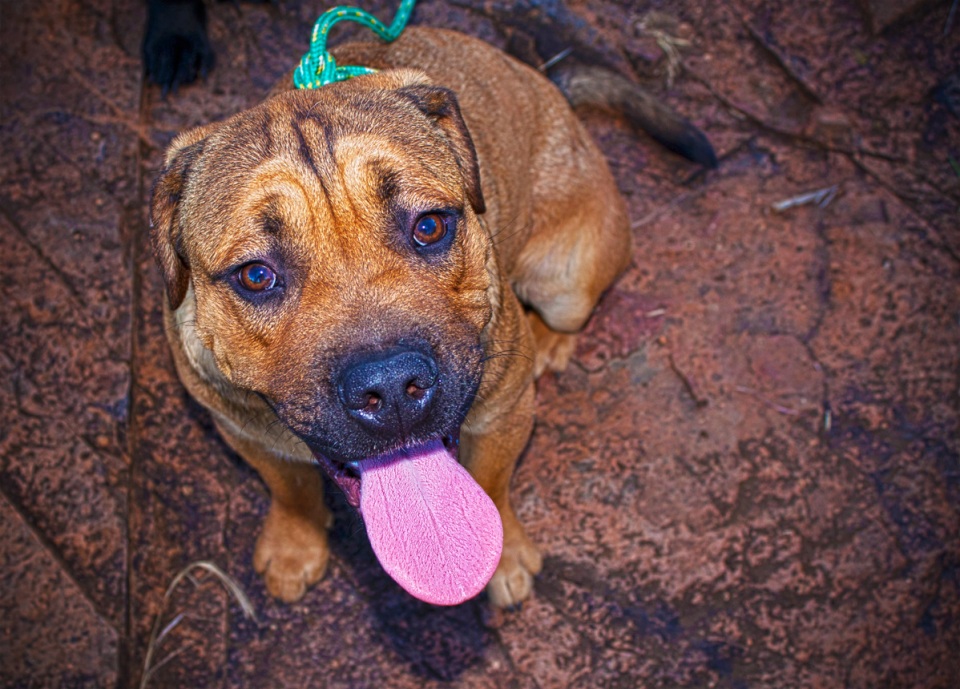 I’m thinking that I need to practise this more – could be a space saver (although it took quite a while!!!)… 🙂

Over the next couple of days we didn’t really do anything significant… But we sure did have a good time relaxing with friends… Enjoying the beach… Just generally hanging out!!! 🙂 So, today I’ll only share a few photos taken over those few days!!! 😀 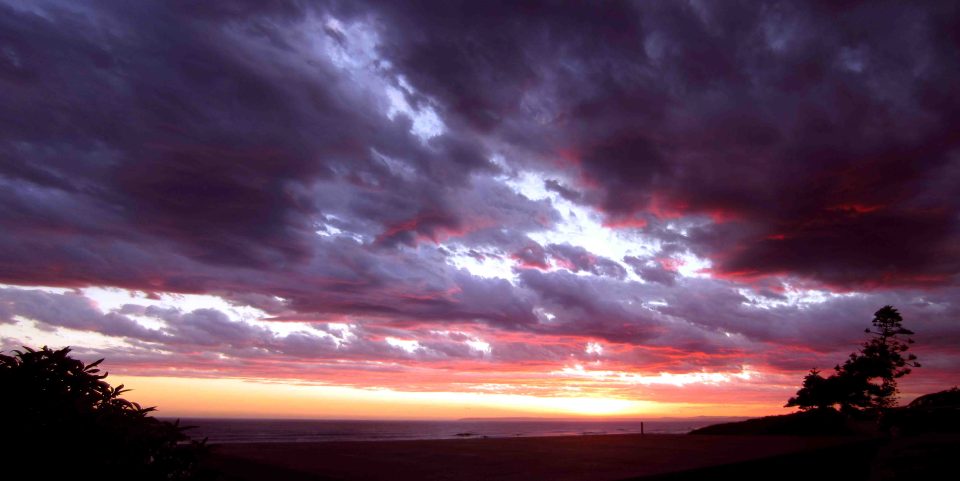 Panorama - The most beautiful sunset EVER...

Awaiting my arrival at home... 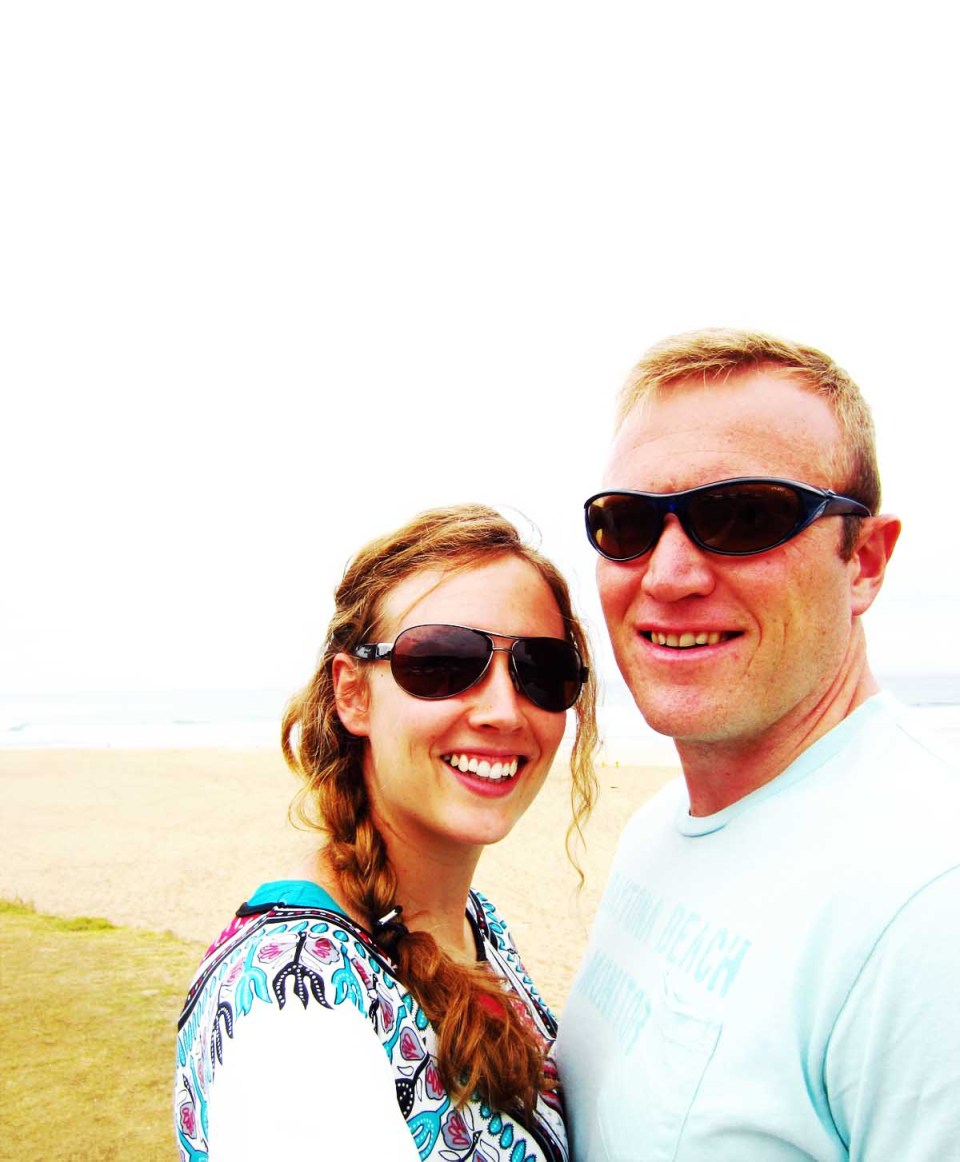 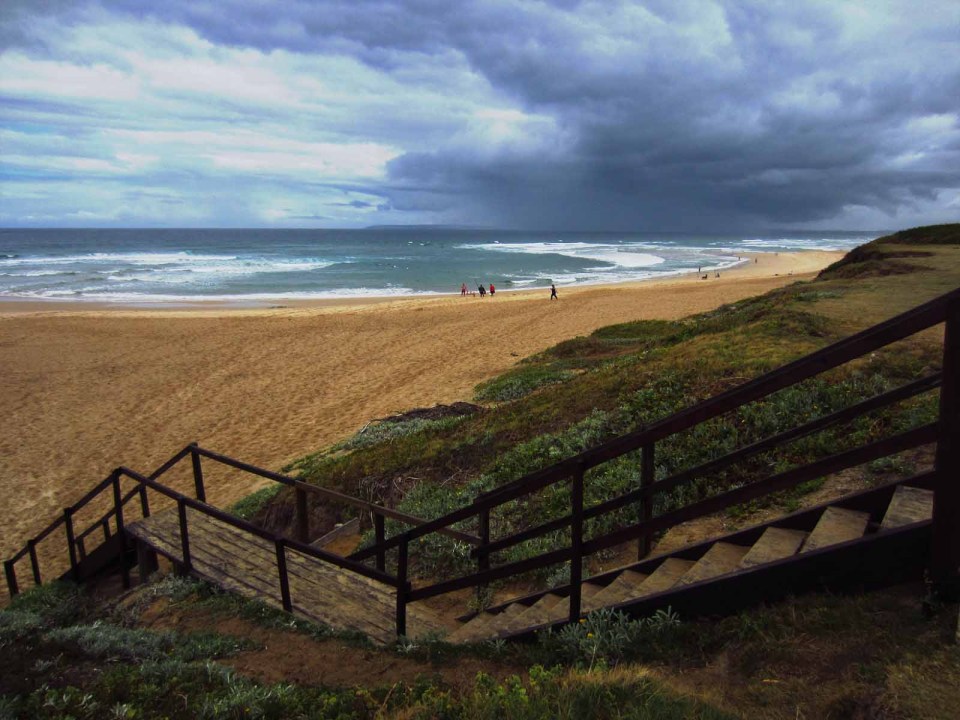 A great view of our beach...

Through the polarised lens... 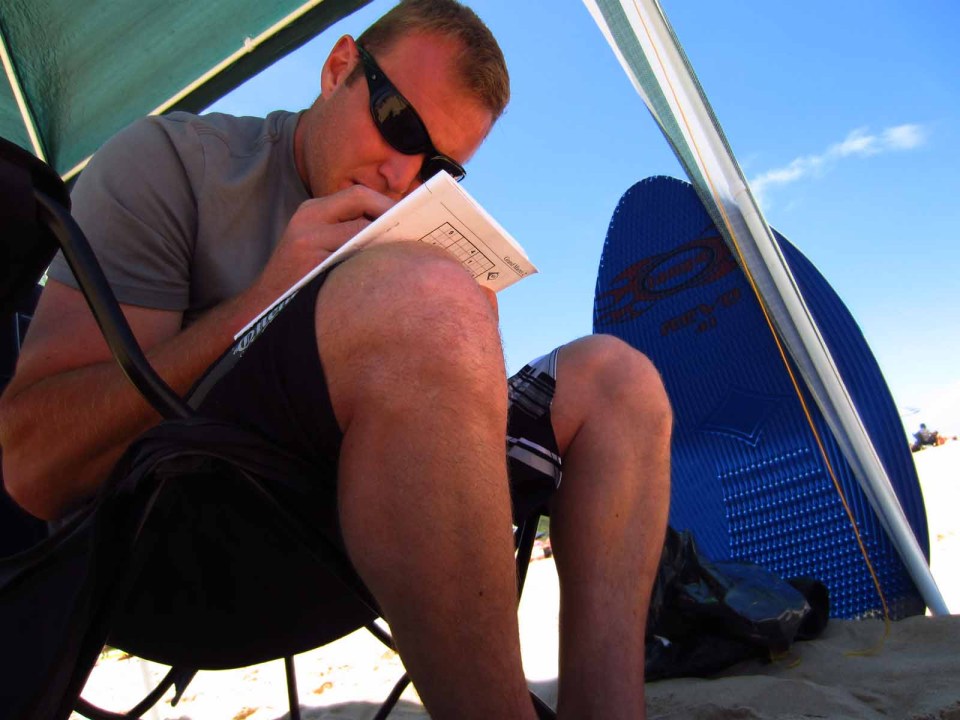 From my point of view...

Panorama - A great day on the beach...

In Road-Tripping to the Cape – Part.1 I ended up with our first glimpses of the spectacular Cape mountains…  Well, by 16h30 we were entering one of the world’s most beautiful passes – – – Swartberg Pass – – – (little did we know it at the time)!!! 😀 **

Entrance to the Swartberg Pass

This pass goes through the Groot Swartberge (or directly translated ‘Big Black mountain’)… Yikesy!! 🙂 We entered from the small town named Prince Albert… We did not have any accommodation booked for this evening & was holding thumbs that we’ll get a place along the way… 😉 (Our initial plan was to camp in the Karoo National Park, but by not booking – – – and only 26 camping spots – – -we were those people that got shown in another direction)!!! 😀

We were definitely two very very very small subjects in this enormously breathtaking creation!!! We were awestruck even before we officially entered this pass (stopped regularly for photos along the way!!) 🙂 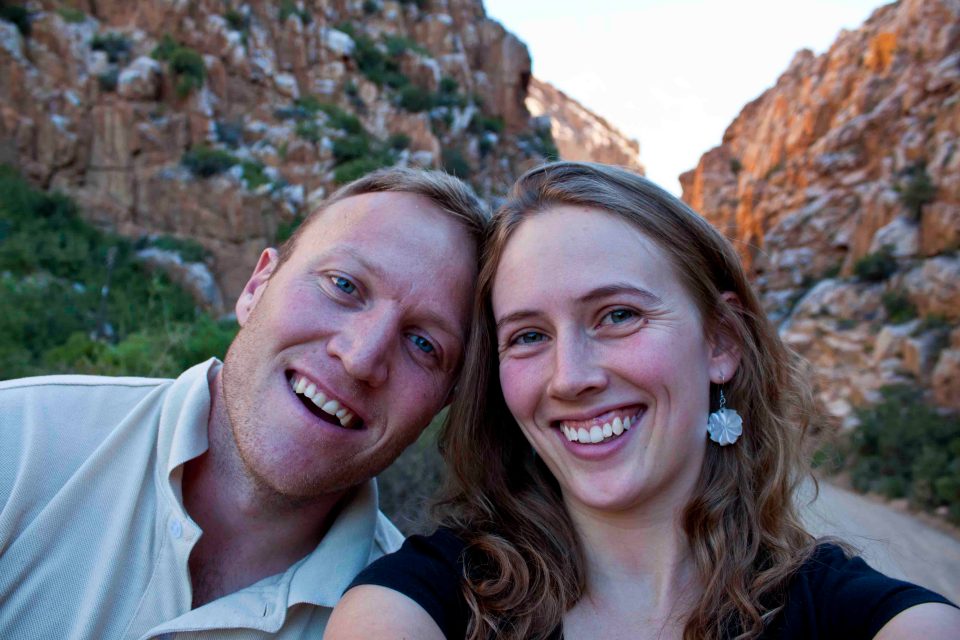 Right at the entrance we captured our memory!!! 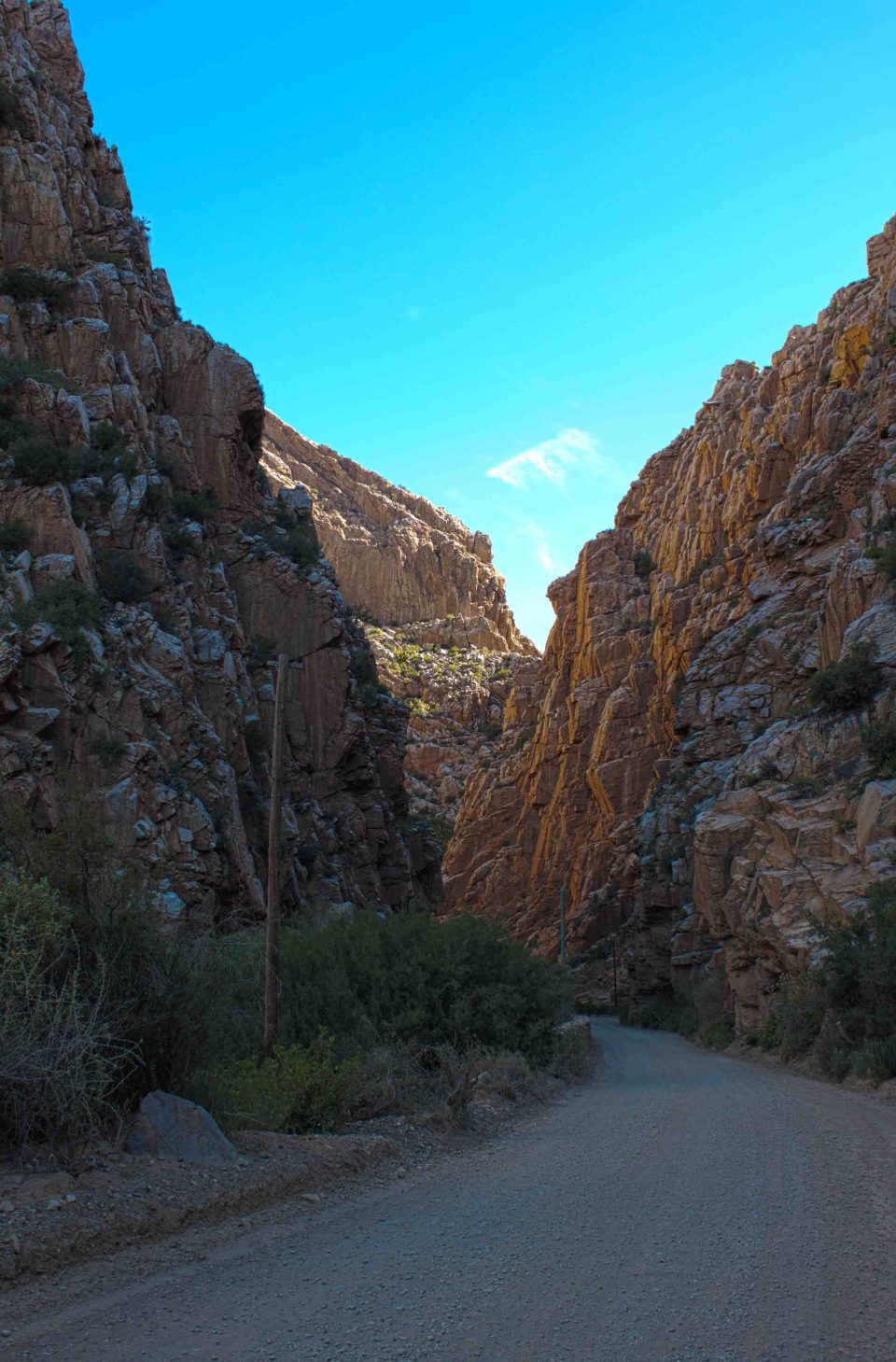 “… Prince Albert lies at the entrance to the 27km Swartberg Pass, considered one of the most spectacular mountain passes in the world: an untarred road winds to the summit 1,583 metres above sea level in steep zig-zags and sudden switchbacks,  with breath-taking views at every turn… “

I also have an HDR of this shot, but my trusty little snapper has a much wider angle than my slr... so I decided to go for the snapper shot - the scale of these majestic mountains seem more impressive!!!

Around yet another corner (HDR)

“… The entrance is through a narrow Cape sandstone kloof where the eye is drawn upwards by the convoluted rock faces to the sparkling sky above. The only sounds are bubbling water, the wind in the trees and birdsong. Several picnic sites near the river provide tranquil spots to stop and absorb the peace and splendour …”

“… The natural characteristics of the Pass are magnificent as are the man-made features. This was Thomas Bain’s last engineering masterpiece …”

Looking back on the road we have driven (HDR)

“… Along the way there are relics of an old prison, toll hut, hotel and other interesting historical sites.

Often covered in snow in winter, the mountains’ unique micro-climate supports fynbos and a rich bird population, in contrast with the arid zone flora and fauna outside its cool, shady kloofs. Watch out for black eagles and klipspringers.

The Swartberg Pass is now part of a World Heritage Site …”

Yay, I’ve seen a World Heritage Site!!! 😀 That doesn’t happen often!!! 🙂 In my holiday update I posted a photo of me taking a photo of the landscape… Well, I’m not sure that this is the best that it can look (I will still be experimenting with it until I find the perfect look), but nevertheless, here is my 360 panorama!!! (Let me know if the quality is very bad… for some or other reason it did not want to show my photo & I had to rescale it way smaller 😦 Else, I’ll try it in a post of it’s own!!!) 🙂

360 Panorama of the Groot Swartberg Landscape!!!

Not long thereafter we reached the summit, called “Die Top” (or in english – The Top)!!! 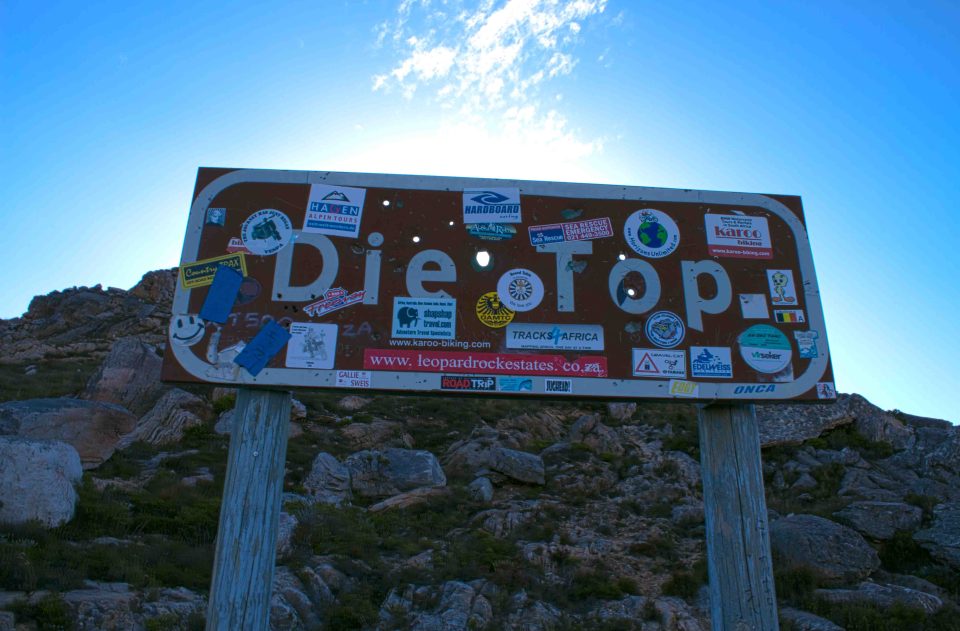 Close-up of the sign - I loved that the different clubs & organizations all left their "mark" here... so much character!!! (HDR)

Where we are heading... (view to the right) - a much different landscape!!!

We spent almost two hours travelling those 27km’s… (but seeing that we spent so much time taken photos, I am not surprised!!!) 😉 We travelled on the exit road out of the pass – still without a place to sleep 🙂 – until we came across a camp site at the foot of the mountains… We were in luck!!! 😀 Seeing that this road is off the beaten track, we were fortunate that there were not many people camping there!!!

Beyond exhausted from the day of long driving hours, excitement over the majestic pass & stress over where we were going to sleep, we set up camp in this dream spot!!!

Our express set-up for dinner!!! (in true South African style) 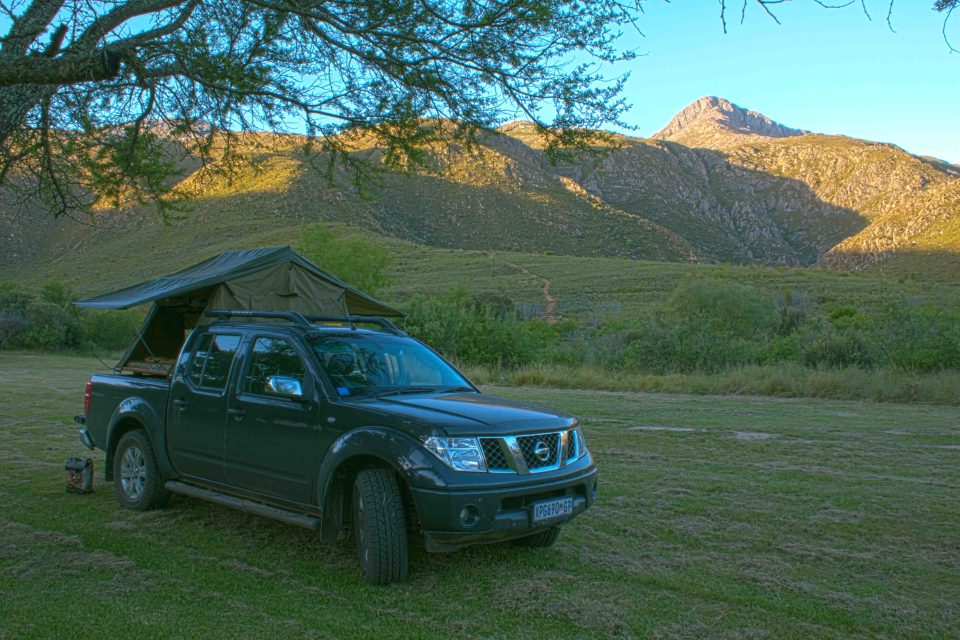 I this is where I will be leaving you tonight!!! If ever you are fortunate enough to visit this site…. my photos doesn’t even nearly do it justice!!! 😀 Thanks for stopping by!!! 🙂 **

This was crazy!!! As if the original palace wasn’t big enough, they had to build this additional wing to the Hofburg Palace in Vienna, Austria!! It is huge, it is beautiful, its culturally priceless – – – & it earns its majestic spot in this weeks Travel Lane post!!! – – – I can’t even imagine South Africa ever having treasures such as these!!! (but possibly I’m not objective in this opinion!!)

On the left of the building you can clearly see where the old & new building connect!! Gorgeous isn’t it?? You can’t see her, but my mom is inspecting a map on one of the benches on the right hand side!!

It was a let down (although I did learn quite a few tricks for photoshop!!). I took my camera along in the hope of there being lots to photograph – – – but nevertheless!! The lenses weren’t really cheaper than when you buy it in the shops (which was what I was after!), but as I say, it wasn’t a complete let-down!

It was held in the Coca-Cola dome in Johannesburg! For those of you who don’t know what it looks like… It is a HUGE dome… a self-supported dome!! Most people don’t/won’t realize how awesome this structure really is (but from an engineering view-point… AWESOME!! 😀 )… So I am always excited to get to see this structure… it never gets old!

These are panorama compiled from the same photographs – – – I let it stitch two different ways (the difference should be obvious)… Each one conveying the enormity of a different aspect!!

I was not planning on doing anything with these photos (else I would have taken enough to complete the roof structure!)! I took it out of complete boredom… & not to waste carrying my camera along with me for the day!! 😉

Taken on the farm just outside of my hometown… yes yes… the one where we swim, rock-climb and just generally L.A.Z.E around!!! 😀 **

I was in a very relaxed state when I took this panorama…. 🙂

This photo is soooooooo small & compressed… how do I link (something?) so that you can see the bigger picture?? 😉 **